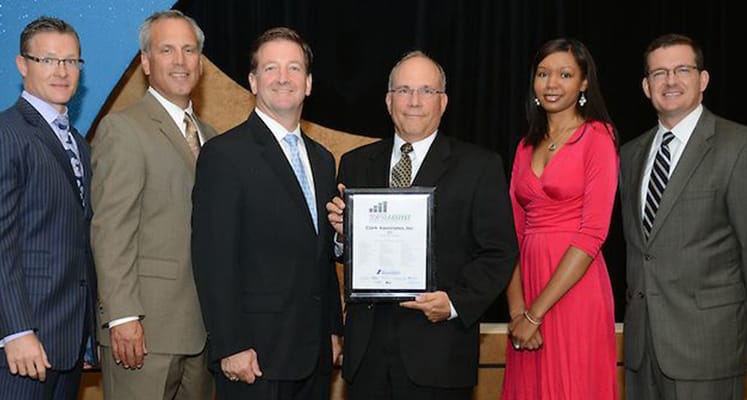 (Lancaster, PA) – Clark Associates, Inc. ranked third in the Central Penn Business Journal's 2014 list of the fifty fastest growing companies in the mid-state. In 2013, the company placed 1st, and has appeared on the list every year since 2009 when it ranked 11th.

Expansion helped fuel the continued strong growth, with new facilities in the Allentown, Pa., and Wilmington, Del. markets. A distribution center in Dayton, Nev. allows the company's e-commerce division to ship supplies and equipment to 95 percent of the United States in 1 to 2 business days.

The company encourages continuing education to help deliver industry-leading levels of service to all its customers. 44 employees have earned the Certified Foodservice Professional (CFSP) credential, which is awarded by the North American Association of Food Equipment Manufacturers (NAFEM). To earn the CFSP credential, individuals must accumulate points based on his or her level of education, industry experience and participation, and continuing education, as well as pass a written exam.

To qualify for the annual ranking, a company had to nominate itself or be nominated by another company. Each applicant was required to supply three years of revenue information. Eligible nominees had to show revenue of at least $500,000 for the last three years (2011, 2012, and 2013), and also show increasing revenue overall.

SF&Company, CPAs and Business Advisors, then analyzed the data; companies were ranked first by dollar growth from year one to year three, then by percentage of growth. Once the dollar grown and percentage growth were totaled, the company with the highest ranking was awarded first place, with the other companies following suit.

Clark Associates is a privately held company headquartered in Lancaster, Pa and has been recognized as one of Central Pa's fastest growing companies. Employing over 800 people, Clark’s multiple divisions and branches in mechanical, sales, and manufacturing serve a variety of commercial food service customers nationwide. For more information on our business and history, please visit www.clarkinc.biz.